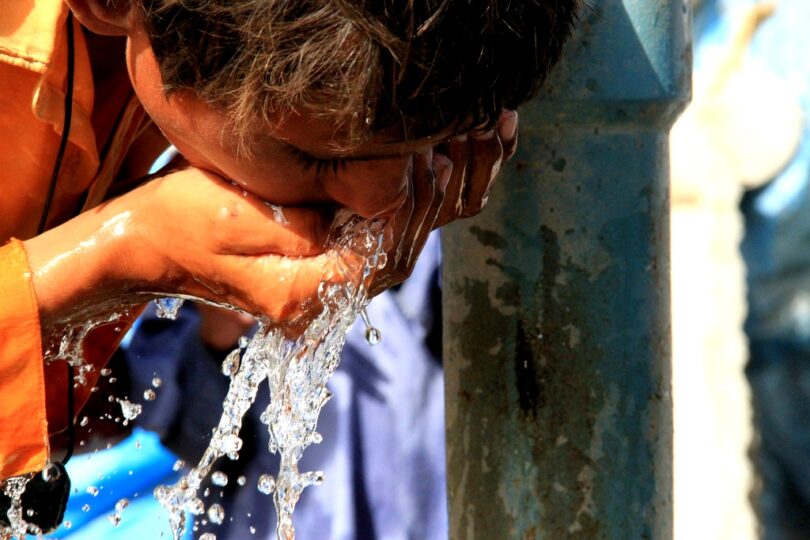 We’re constantly told to drink about eight cups of water a day, the ideal amount to stay healthy and hydrated for any average adult. This amount is increased when we decide to engage in exercise, sports, spend hours under the sun, or have a health condition that dehydrates us and requires us to drink excess water.

However, there are some instances when we can drink too much water, leading to over-hydration or water poisoning. In these cases, our bodies contain too much H2O in our bloodstream, diluting the amount of electrolytes we need, and can create serious side-effects that could potentially become lethal. It’s critical to monitor our water intake, especially during sports or extreme exercise, and ensure we’re both getting enough and not too much.

We don’t need to be undergoing hard-core training or be a professional athlete in order to find ourselves with symptoms of water poisoning.

Anyone with diluted amounts of sodium in their bloodstream can fall victim, and other instances of water becoming too abundant in our bodies is when we’re taking diuretics or have hormonal imbalances. For these instances, don’t hesitate to call a nurse or doctor for professional advice. For mild to moderate cases, this guide will teach us what water poisoning is and what we can do to treat it as well as prevent it.

What is water poisoning?

It is often referred to as dilutional hyponatremia, or just hyponatremia. Essentially, it’s when we have too much water (H2O) in our blood stream, diluting the amount of electrolytes our bodies’ need in order to function properly. Electrolytes are minerals in our bloodstream that create both positive (+) and negative (-) charges, isolating ions on the inside and outside of each and every one of our cells to maintain homeostasis.

In other words, they uphold the balance of most functions between the cells in our bodies while regulating how much water enters each cell. Among these is sodium, the leading electrolyte that locates itself in fluids surrounding cells. They help normal muscle and nerve functions, keep us hydrated, and are often lost through sweat during vigorous exercise. This is why athletes are at higher risk of being poisoned by the very water they drink to hydrate. While exercising we lose essential sodium, increase our water intake, and dilute the electrolytes in our bloodstream. Electrolytes not only assist with muscle and nerve functions, they’re needed to control a vast array of important biological tasks that include but aren’t limited to:

What are symptoms of hyponatremia?

Because electrolytes, especially sodium, help our bodies’ control so many divergent functions within our biology, there are several assorted symptoms we can have when our water/sodium homeostasis is off-balance. They can range from mild to severe, depending on how much sodium has been depleted from the bloodstream or how much excess water has been consumed. When exercising or training while drinking excessive water, it’s important to look for any of these water poisoning symptoms. Of them include:

In extreme cases of hyponatremia, our brain cells begin to swell with water as depleted amounts of sodium are unable to form ionic barriers keeping the water out. A coma can then ensue, and in some cases death. It’s important to look for more than one of these indicators, and note any pre-existing health conditions that could be the actual cause of a symptom. Mild cases usually consist of headaches, fatigue, and especially muscle cramps – which can all be treated easily by replenishing the electrolytes in our body.

The main cause of having insufficient electrolytes and sodium in our system is from extreme exercise, training, or from sweating by being in the sun or around machinery (in factories) all day. These instances cause us to sweat out the sodium that keeps our sodium/water homeostasis at the correct levels within each cell of our body. On top of this, athletes and workers tend to over-drink the amount of water they need in order to stay hydrated, but in fact, they’ll consume too much which dilutes the amount of electrolytes in their systems. Do read our timely article on the top hydration drinks that are safe to drink.

However, we don’t have to be an athlete or merely drink too much water in order to have a case of H2O poisoning. Any manner in which we create an imbalance of sodium in our bloodstream can lead to problems. If symptoms go undetected or ignored for a prolonged amount of time, serious consequences can take a grave toll on our body.

Here are several manners in which we can derive a case of hyponatremia:

How to diagnose hyponatremia

Before we’re 100% sure that what we’re experiencing is hyponatremia, the best way to diagnose ourselves is to first ask what our prior activities have been, what we’ve been eating, and if we’ve been ingesting too much H2O. By regarding the lists of symptoms and causes, check off any that may apply to you and your lifestyle. In rare occasions, people who fail to ingest enough sodium but continue to drink normal amounts of water may begin to feel symptoms.

If we are experiencing more than one of the listed symptoms, or have engaged or experienced any of the causes, then chances are our diagnosis is correct and we need to immediately replenish our electrolytes. Usually, athletes that fail to reload the electrolytes in their bodies fall victim to hyponatremia, but these cases are generally fixable if brought to our attention in time and electrolytes are consumed. To poison our body with water does take quite a bit – up to gallons of H2O before we begin to experience side-effects. Vomiting will induce as the body attempts to rid itself of the excess water, which is why there are stories about people training for marathons running until they heave.

While training or running the marathon itself, it can be easy to ingest gallons of water if the event takes hours/days. we’ve been experiencing the more severe symptoms such as dizziness, disorientation, slurred speech, or seizures, it’s wise to see a doctor immediately before the condition becomes fatal. Check out our article on the dangers of water overhydration to learn more of this condition.

When experiencing less severe symptoms of hyponatremia, the best way to put our body back into healthy homeostasis can usually be done by drinking less H2O and quickly replenishing our electrolytes. There are many drinks currently on the market now that can both hydrate us as well as replenish our electrolytes:

If we’re not fond of drinks that contain too much sugar or strange ingredients and we’re looking for a more natural, homemade drink that replenishes electrolytes, we can also make our own using oranges, lemons, honey, and salt. Combine ½ cup of orange juice, ¼ cup lemon juice, 2 cups of wter, 2 tablespoons of honey, and 1/8 teaspoon of Celtic sea salt. Once mixed well, the blend can then be drunk and will both hydrate and replace electrolytes. Foods can also help us balance our sodium/water homeostasis.  Just check the label – if it has a good amount of sodium or sodium chloride within it, the effects of hyponatremia can be reversed easily.

Foods that are great for reversing the effects include:

Keep in mind that consuming either these drinks or foods is only a good solution of we’re aware that our case of hyponatremia is mild to moderate. Severe cases must be considered and those of us experiencing worsening symptoms should be taken to a hospital to be evaluated. Sometimes, the best and quickest way to fix hyponatremia is by having an IV attached to us, with the needed electrolytes being placed directly into our bloodstream. Only then can more fatal cases be controlled, as our brains become swollen and professional medical attention is needed.

This is especially true if we’re experiencing other health issues that could be the cause of low blood sodium. Only doctors can then make the correct evaluations and treatment procedures.

We’ve already taken the first step towards prevention by reading about hyponatremia – education! By educating ourselves about the manner in which water can actually poison our bodies if too much is consumed, we’ve now the knowledge needed for the future to ensure this doesn’t happen to us or those we love.

Sharing this information with others can create a domino effect in prevention, so look out for your family, any friends with health conditions, teammates, and exercise buddies by teaching them the importance of electrolytes and risk of diluting our blood with too much water consumption. When more people are aware, less will make an uneducated mistake.

Now, we must be sure to consume water in moderation. Normally, eight glasses of water a day is ideal for adults, give or take a cup depending on our body weight and the environment we live in. If we live in a sunny/hot location and sweat day-round, drinking a little more water than recommended should be fine to keep up hydration. If we’re exercising or training for a sporting event, drinking energy drinks that contain electrolytes is a better option than water either before, during, or after the workout or training session.

Drinking water during exercise should be fine, as long as we don’t overdo it. As soon as we begin to feel the symptoms of hyponatremia, immediately replenish electrolytes by either an energy drink or eating a food that contains sodium.

The next step in prevention is to ensure we’re treating any previous medical conditions we’re aware of, and to see our doctor to confirm we haven’t developed any new ones. Also, to note the medications we’re taking (especially diuretics) and be aware of any low-blood-sodium side-effects. Often, hyponatremia can arise in people who aren’t athletes that’ve drank too much water, but rather, have a health condition or take medications that has lead them to low sodium levels in their body.

Any conditions that involve hormonal imbalances should be taken into consideration and well monitored and maintained by enacting on the next step to prevention, which is routinely consuming enough electrolytes.

Eating and drinking enough liquids and foods with electrolytes – this is the step both those of us with health conditions and healthy adults and children must ensure we do. In many cultures, this is easy to do as salt; sodium chloride is abundant in most foods we eat. Just be sure to not consume too much food with sodium, which can also lead to ill health that affect our hearts, bones, and kidneys.

Now that we know why too much water intake is a bad thing, low sodium in our bloodstream is unhealthy, and how to prevent both occurrences from happening, we’re prepared to engage in vigorous exercise and training the right way. Becoming aware of our body and its needs helps us understand the very actions we take that could endanger it, leading to symptoms that could potentially be life-threatening.

Drinking too much water, not ingesting enough electrolytes, failing to properly maintain our medications and health conditions can all lead to hyponatremia. And while the milder cases are easily treatable simply by increasing sodium intake, more severe occurrences must be evaluated by professionals in case there are underlying factors that must be addressed.

To learn more of water intoxication and its treatment, see our article on this important topic.

Nora Taylor is passionate about helping developing countries and people worldwide to deal with infections and diseases. She is certified in Workplace Emergency First Aid, Red Cross First Aid and Marine First Aid. Nora lives in Vancouver, BC, but travels to Africa and Asia every year. Her dream is that one day we can conquer many known diseases through a proper preparation and education of people in all parts of the world.