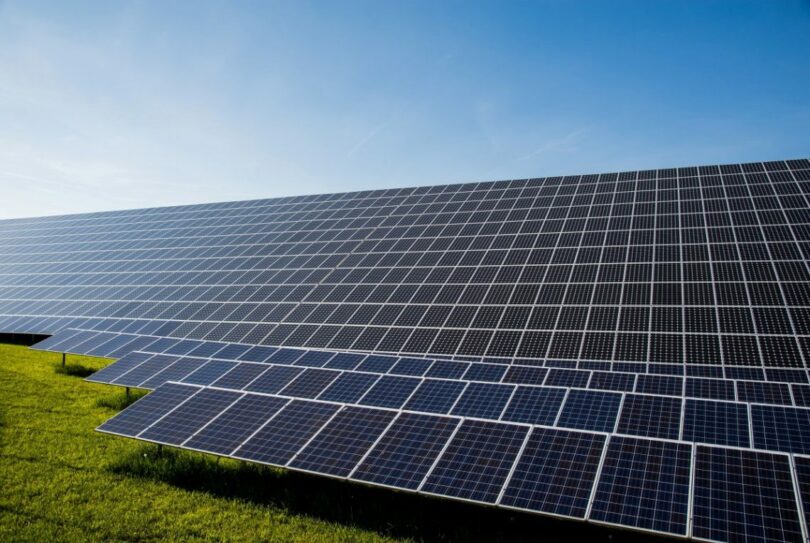 Light is power that does not end, but rather transforms from one form into another. To transform light into electricity, a device is required like a Solar panel; this is a device, which can transform sunlight into electricity. The astronomers call it “Sol”, what means the Sun. On the other hand, some scientists name it “Photovoltaics”, it means “light-electricity”.

In a solar panel, there is a collection of solar cells. These small sized solar cells are positioned all over the panel and the more light the panel gets, the more electricity it can produce.

What you should consider when buying a solar panel

When you have decided to buy a solar panel, the first question that comes up is what criteria or characteristics you should consider. This article will help you by suggesting some crucial points, which will help with your purchase. Cost: The cost of a solar panel depends on various factors such as its size in watt, its physical size, longevity, quality of the products and suitability with your purpose.

The three tiers of solar panel: In addition to cost, you should consider two other issues; these are the method of manufacturing and used material. There are three types of quality. These are:

Temperature efficiency: It is essential to determine, as it is needed to check whether temperature has any impact on the panel.

Longevity: Durability is important, because it shows whether you can trust the product of a particular company. Generally, the renowned companies give a warranty of 25-year.

Check out our article on how to choose the best solar panels for your guidance.

Choosing a type of solar panel

At first, let’s know about what Crystalline Silicon is.

Among all the photovoltaics in this present world, more than 85 percent of them are made of silicon, though there are some varieties of this element. In a research conducted in 2011, more than 95 percent of all the shipments conducted by US producers to the residential areas were the solar panels made of crystalline silicon. This silicon may have several forms. The differences between these forms depend on the pureness of the silicon.

Now you can ask that: how it is possible to determine the pureness of silicon? Well, the scientists consider that, if the molecules of silicon are perfectly aligned, the silicone can be considered pure. The more perfect this alignment is, the better the cell of the solar panel can convert the solar energy or the sunlight into electricity.

See: How Do Solar Panels Work: Renewable Energy Explained for Everyone

However, it is noteworthy that, if you want to improve the purity you will need to pay some extra money. The crucial matter about this kind of panel is that, efficiency is not your prime concern. Rather, cost and space will be the two issues you will be later concerned about.

Also known as single-crystalline silicon, it is very easy to recognize. To identify, you will need to look at its external part. Try to find out whether the coloring is even and uniform. If it is so, then it indicates that, the solar panel has highly pure silicon.

The solar cells of this panel are generally made of silicon ingots, cylindrical in shape. To improve the performance of the panel and lower the cost, silicon wafers are made. For making silicon wafers, four sides of the cylindrical ingots are cut off. In consequence, monocrystalline solar panel gains its particular look.

There are several benefits of using monocrystalline solar panel. Some of them are mentioned as follows:

The monocrystalline solar panel has the highest efficiency rate. The reason behind this is that, it is made of silicon of highest grade. Its efficiency rate is very impressive (from 15 % to 20 %).

The most efficient solar panel in this category is made by SunPower and the name of their latest series is E20. This one is capable to converse up to 20.1 %. Another popular series is X-series. It has come to market in April 2013 and it has a record-breaking capability of converting sunlight: the percentage is 21.5. These are the panels that achieved the highest positive feedback from the users in the US market. Space sufficiency is another crucial characteristic of this kind of Solar panel. The monocrystalline solar panel can provide highest power and it requires very less amount of area compared to other types of solar panels. This solar panel is capable of producing up to four times electricity compared to the solar panel on thin film.

The monocrystalline solar panel is also famous for its longevity. The producers were even able to give a twenty five year warranty on this kind of solar panel.

It provides better performance at the low light situations. For that reason, users considerably keep this monocrystalline solar panel ahead compared to other kinds of solar panels.

However, there are some flaws in monocrystalline solar panel. Bellow we discuss some of them in detail.

High cost is one of the most common reasons, for which users general do not recommend buying a monocrystalline solar panel. For that reason, the consumers, who are concerned about the money, should consider polycrystalline silicon as suitable for their purpose. In some cases, they can also choose thin film to save their money. Waste of its significant portion of monocrystalline solar panel is another negative side of it. The name of the process used to produce monocrystalline silicon is the Czochralski process. Cylindrical ingots are produced in large quantity. However, as it was mentioned earlier, as part of making silicon wafers, four sides of the ingots are cut off. This is significant waste of the original silicon.

In 1981, for the first time, a solar panel based on Polycrystalline silicon was marketed. It is also known as Polysilicon (p-Sci) and multi-crystalline silicon (mc-Si). It is noteworthy that, this kind of solar cell does not need any Czochralski process. For these solar cells, square wafers are used.

The process of making square wafers is very simple. Silicon in raw form is taken at first, then it is melted and later poured in a square sized mould. After cooling this, the whole material is cut into square shape. Square wafers are made in this way.

You will find several benefits of using polycrystalline silicon solar panel. Some of them are mentioned bellow:

However, there are several drawbacks of using polycrystalline silicon solar panel. Some of the crucial disadvantages are as follows:

Polycrystalline silicon is also used to make another kind of solar cells. Its name is String Ribbon Solar cells. The name of this type of solar cells is derived from the name of the manufacturing technology – String Ribbon Solar cells. The silicon ribbons used here are very thin and the process of making it is very straightforward. Through the molten silicon, temperature resilient wires are dragged. However, this type of solar panel has similar appearance with the traditional types of polycrystalline solar panels. 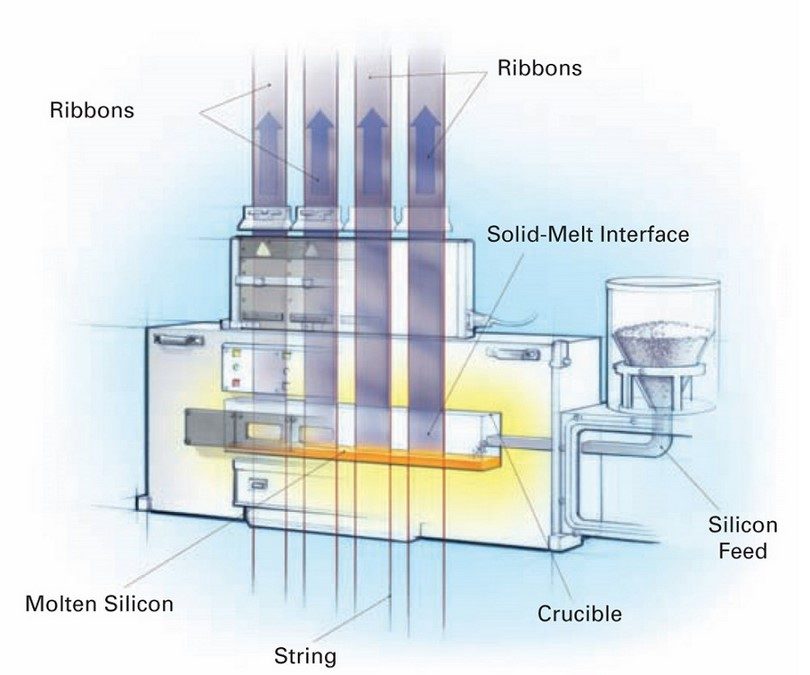 The alarming fact is that, the manufacturer company of this solar panel, Evergreen Solar, has now become bankrupt. In consequence, it is now unclear what would be the future of the String Ribbon technology.

As String Ribbon Solar Panel is made of Polycrystalline silicon, you will have the same benefits of it as discussed above. However, the most positive side of this solar panel is that, it utilizes only the half amount of the silicon used to produce monocrystalline. As a result, the cost is lower.

It is possible to face one of the following problems if you are interested to use String Ribbon Solar Panel:

There can be various types of thin film solar cells that can be categorized according to the photovoltaic material, which has been deposited on one layer. These are:

It is noteworthy that, except for Organic Photovoltaic (OPC), the rest of the products are commercially available on the market.

There are several technologies, which are used to produce thin-film solar cells and the efficiency of these solar cells depends on these technologies. Normally, the efficiency of these solar panels is approximately 7% to 13%. Besides that, the production modules run at almost 9%. Scientists are trying to improve its efficiency and they are expecting that, in near future, it will be possible to increase the percentage to the almost 10 to 16%. Interestingly, the market of the thin-film photovoltaic has grown up to 60% per year from the year of 2002 to 2007. From a research conducted on 2011, it has been found that, approximately 5% of the photovoltaic module (made in US), which have been made shipment to various residential areas, are made of thin-film.

However, there are several negative sides of using thin-film solar cells. Some of the important disadvantages are:

There are various kinds of solar panels that you can find online. However, the products given below are considered as best by the users.

The particular reasons you can choose this product is that, it is very easy to use, it has an excellent appearance and can be used for several purposes (indoor and outdoor). It comes with an excellent charge controller, PWM 30A, and, in addition to that, it comes with a unique designed bracket, namely Z bracket. 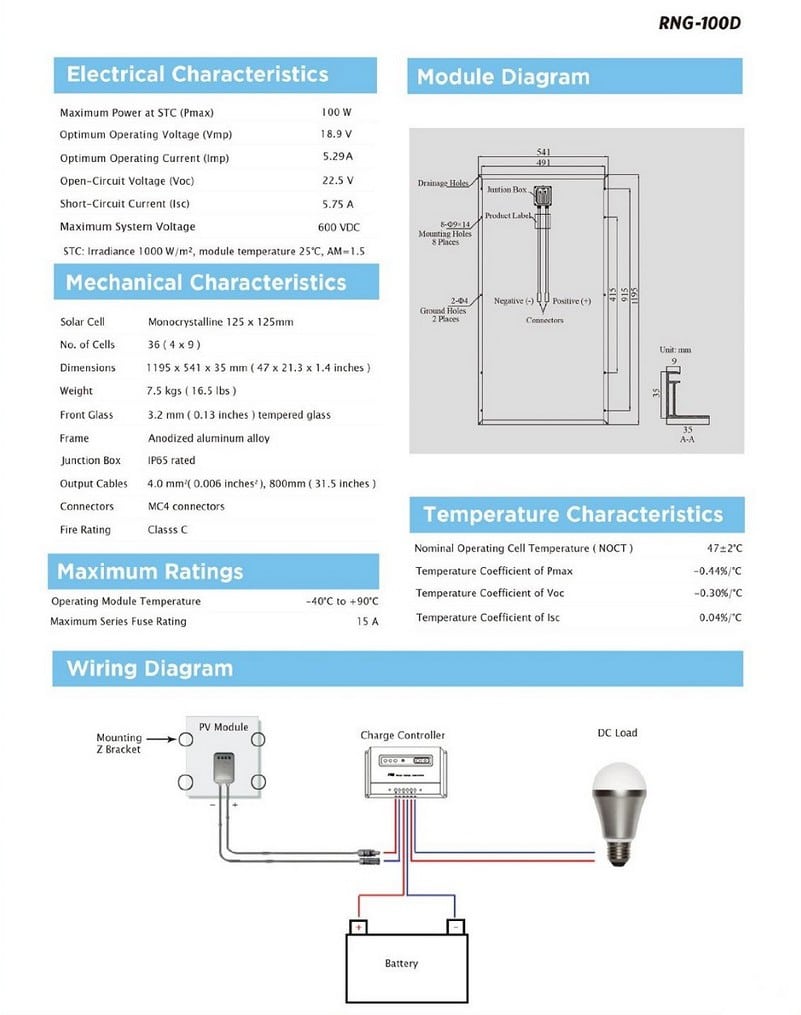 You will get a pair of twenty feet adaptor (MC4 Adaptor). The ideal output is 500 watt hours every day and it is capable to charge a battery (a 50Ah battery) within three hours (depends on availability of sunlight). The company provides a 25-year warranty.

If you like this product you can find and buy it on Amazon.

There are several notable features of this product and one of them is its plastic back sheet that can be curved up to 30 degree. It is possible to use this panel on various surfaces including a tent, a cabin and/or a boat. You can even use it in crowded places or tight areas and it is perfect for non-permanent purposes. The holes on the panel are drilled so you can mount and secure it very quickly.

Besides these, you will be given a junction box that is sealed and waterproof. It will come with a pair of cables (ten inches) – MC4 connectors are also available with it. Its price is reasonable as you can buy it at $230. If you like this product you can find and check its price on Amazon.

Now, you are aware of the basic characteristics that you need to know on a solar panel. It is time to visit a store and buy a suitable solar panel for your particular purpose. You can also ask for help and advice from your neighbors or friends and family, who already use solar panels. Some further practical experience doesn’t hurt and it will make you more confident while buying a solar panel.

To find out how to install solar panels, see our article on this important topic.