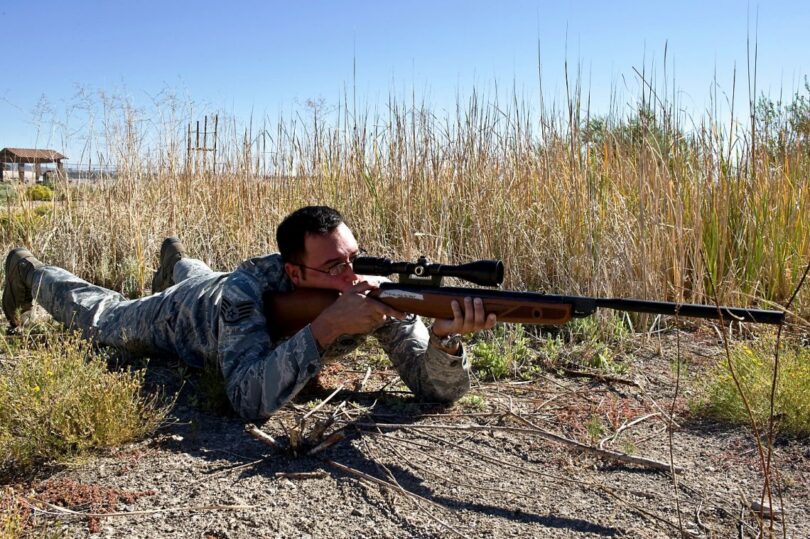 Air rifle hunting is a sport that many hunters undertake and can prove an advantageous endeavor. The benefits of air gun use are many, and neophyte and avid hunting enthusiasts find the use of air weapons ideal when hunting a variety of small game. The National Rifle Association (NRA) supports the use of air guns for the pursuit of small game; according to the association, air weapons were, at one time, the best weapon for new hunters, but such weapons have transitioned into mainstream use and many hunters are turning to the use of air rifles.

The NRA asserts massive improvements in the design, accuracy, and dependability of air guns. The major improvements, including features and reliability, are just a few factors contributing to the increase in popularity of such weapons and why so many hunters, both amateur and skilled, are turning toward the use of air guns.

Air guns are inexpensive, especially when compared to traditional guns. Additionally, these weapons are easy to learn how to use, and are equally easy to care for in order to ensure the long-term operation of such weapons. People have used air rifles throughout history for many reasons; they have used air guns for protection and as war armaments. There are even famous instances where air weapons, as well be explored in depth later. Today, people rely on the use of air guns for plinking metal cans, target practice, and for the purposes of hunting small game as well as controlling pests.

Air gun use throughout history

Scholars suggesting the first air rifle weapons were in use during mid-sixteenth century. Many of the first air guns have not survived the passage of time, and those that have are now in the hands of collectors or museums around the world.

The earliest air weapons were of two distinct types: weapons dependent on a reservoir of stored, compressed air, also known as pneumatic weapons, and spring-loaded devices, the latter of which people used for the purposes of indoor target shooting. The bellow air weapons were impressively precise at the time, and ideal for short range shooting.

The pneumatic weapons were quite powerful, and their design, power, dependability, and accuracy eventually improved to the point that such weapons became the coveted weapon of the noble elite in Europe. Actually, hunting with air rifle weaponry was a common practice among European hunters to take out large stag or wild boar with considerable ease while using pneumatic weapons. Interestingly, only the elite could own pneumatic weapons and commoners could not own air rifles.

By the late eighteenth century, the military was using pneumatic weapons. For instance, in Austria, the Army was fitted with repeating .44 caliber pneumatic weapons. Likewise, in the early nineteen century, during the Corps of Discovery Expedition (otherwise called the Lewis and Clark Expedition), the western explorers William Clark and Meriwether Lewis took along air weapons on their expedition westward. Even during the Civil War, spring-loaded gallery guns were in use, particularly for indoor target practice.

The different styles of air weaponry include CO2, Pneumatic, and Spring-piston guns. The features of air guns include:

If you want to know which one is the best, take a look at our reviews on the best air rifle for hunting.

There are unique models of pneumatic and CO2 air rifles available. The models differ in terms of feature, size, accessories, and total price. The diverse range in terms of functionality and cost make it easy to discover an affordable and ideal hunting option.

Some of the models on the market include weapons like the .22 Caliber Benjamin Discovery Air Rifle Combo; the Beretta CX-4 Storm Co2 Air Gun, and the .22 Caliber Hammerli 850 AirMagnum Co2 .22 Caliber Air Gun. Low-end prices start at around $50, and high-end prices for C02 models are around $500.00 or greater. When it comes to pneumatic offerings, as mentioned earlier there are single and multi-stroke weapons, but there are also pre-charged weapons as well. The advantages of pneumatic rifles include lighter, more compact payloads, fast repeat firing, and if it is not a pre-charged weapon, there are no chemicals needed for their use.

Some of the leading pneumatic air rifles include models by Crosman, Daisy, Hatsan, Feinwerkbau, Benjamin, and Walther, among other models. Pneumatic rifles can cost upward of $2700.00 a rifle, but can also have price tags as low as $35.00.

When it comes to Spring-piston air rifles, there are actually four styles including:

Some of the leading air rifle suppliers today include top companies like Daisy, Beeman Precision Airguns, and Crosman, the latter of which acquired the Benjamin Sheridan brand. There are plenty of guns to choose from when seeking an air rifle for hunting small game. The type of gun a hunter chooses depends on the weapon’s performance, features, accessibility, and cost factors. Below are some of the leading brands of air rifles that hunters desire for small game hunting purposes:

As mentioned previously, hunting with an air rifle is ideal for the pursuit of small game. Nevertheless, an individual must remember, whether hunting for sport or for survival, to use the most humane kill technique when pursuing wildlife. To that end, different small game may require specific hunting techniques to ensure a clean and humane kill. A look at the following table will reveal the appropriate type of small game one can pursue when hunting with this sort of weapons:

There are some clear reasons as to why air guns are not suitable weapons for use in the pursuit of larger game. A hunter needs to remember that hunting with an air gun requires adherence to federal and local laws as well as ethical and humane considerations. Below is a list of some of the animals one should not hunt when using air guns:

Air gun use and legalities

Currently, 24 out of 50 states have laws in place regulating the ownership and/or sale of air weapons. The states of Rhode Island and New Jersey both identify air rifles as firearms. Further, many states hinder the sale of such weapons to children under the age of 18, but will allow adult supervision and parental consent to supersede the legal restriction. Thirteen states place age limitations on the right to own and use air rifles. Ultimately, it is the responsibility of the hunter to discover and obey the laws within his or her locality.

The Law Center to Prevent Gun Violence (LCPGV) asserts that the federal government in the United States does not currently regulate the ownership, sale, or usage of “non-power” firearms. However, the same organization explains that such weapons fall under the Consumer Product Safety Commission (CPSC). The LCPGV offers tools for discovering local laws. Web visitors can discover laws by searching federal or state law or there is a search resource for discovering gun laws by examining specific policies. Laws pertaining to hunting with air rifles vary depending on where a person resides. For instance, if an individual resides within the boundaries of the United Kingdom, the individual will need to obtain a Fire Arms Certificate (FAC) when using an air weapon that weighs greater than 12 pounds. Additional laws are in place in Poland, Scotland, Singapore, South Africa, Germany, Canada, Brazil, New Zealand, Italy, Australia, the Isle of Man, the Netherlands, and the Czech Republic.

Of course, before you think about laws regarding air rifles, you should also consider your hunting permit. If you don’t have one, take a look at our article on how to get a hunting and fishing license.

Hunting with an air rifle has myriad advantages. Today’s air rifles feature high quality designs and enough power to ensure the successful hunt of small game. Pneumatic, CO2, and spring piston rifles all offer specific advantages to the neophyte and adept hunter. Hunters can find affordable air guns and there is a wide selection of weapons to choose from when seeking a quality rifle for use in hunting small game.

With proper care, an air rifle can serve a hunter for many years. If a hunter gives attention to the considerations associated with the different types of air rifles and their use, the individual will have many successful hunting endeavors in the future.