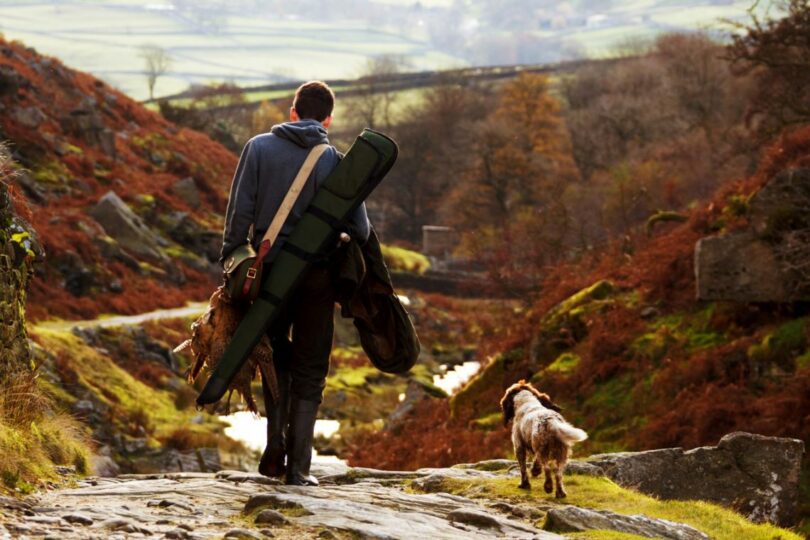 Ever since the dawn of humankind, we have always been hunters. Scientists have even hypothesized that our evolutionary pathways is dependent on our hunting behavior as well as the behavior of the animals that we hunt or have hunted.  We did not hunt solely due to sustenance but we also hunted for tools (made of animal bones) and clothing (fur and skin were cured for this purpose).

During the earliest of days, society was often divided in two: hunters and gatherers. The hunting parties are mostly men while gatherers included women who were pregnant, the elderly and children who are too young to be taught how to hunt.

There is an ongoing debate as to the reason why hunting was a male-dominated field but paleoanthropological experts posit that this is because of men having better competency in throwing and spatial reasoning as well as having advanced dexterity and focus.

This does not mean that the female of the species are often left to gather food, some of them join hunting parties while others still take arms and serve as look-outs or sentinels for the other tribe members.

Eons pass and as mankind slowly progresses from stone tools  to iron, his mastery of hunting also evolved as he slowly learned that with the increasing population, he not only had to hunt effectively but he also needed to hunt efficiently. Increased populated, as we all may know, also means increased competition and leaner catches.

Society has also since then evolved from tribes to villages and cities. Farming and husbandry also became part of mankind’s inherent skill set and these are more sustainable, more profitable than hunting and gathering. Progress in the end has almost diminished modern human’s need to hunt animals for food. Why almost? Up to this day, several members of humanity still want to experience what our ancestors have experienced while hunting game. 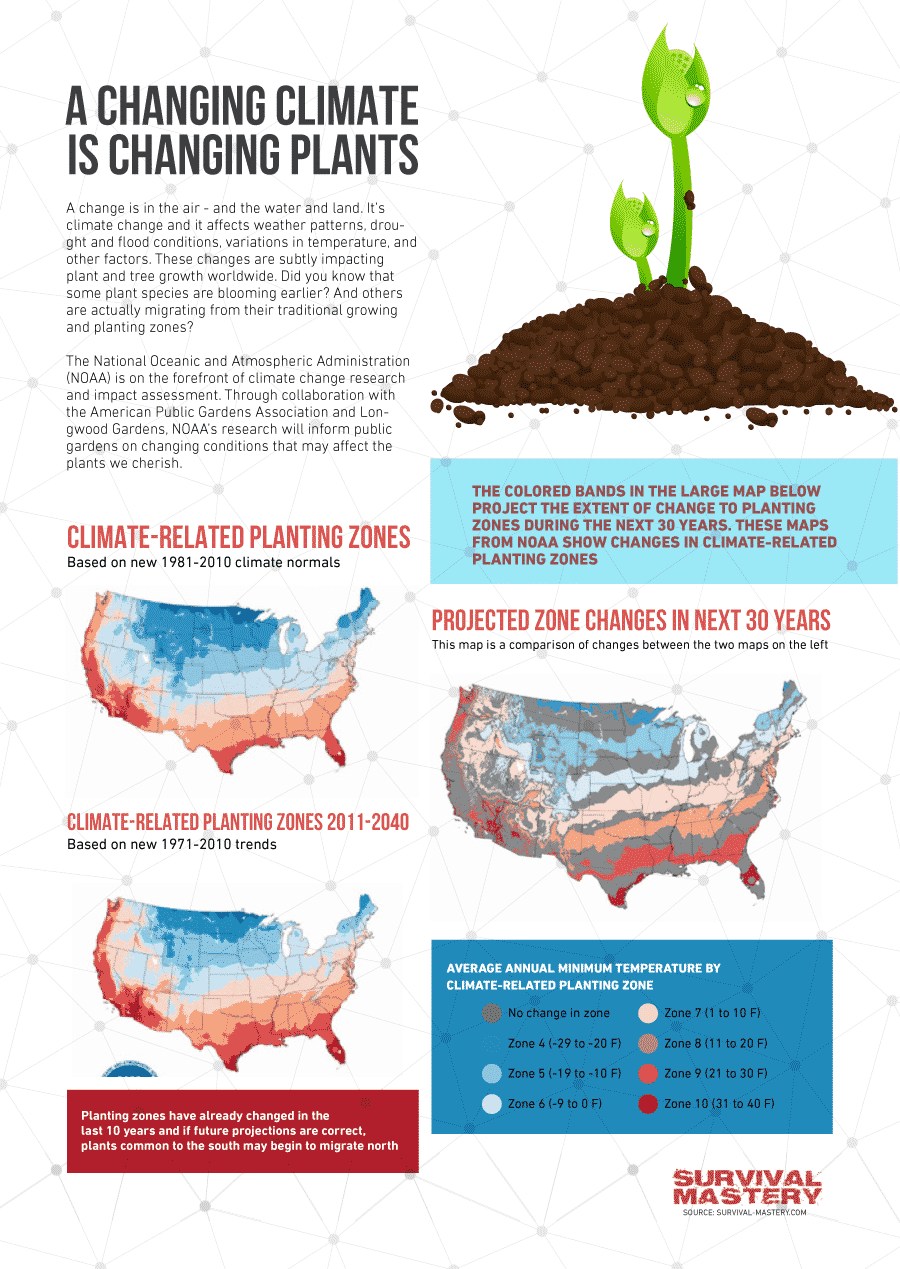 The game we hunt nowadays may not as be as big as the bison and buffaloes of yesteryear but the same skills and technique still apply, some of them have even been modernized to adapt to the ever changing conditions of our planet.

Classic hunting techniques include trapping, baiting, shooting, flushing and stalking. All of these techniques work perfectly well in almost any condition but they have to meet certain conditions to be fully effective. These conditions include the season, the location and the prime target of the hunt. These three will have to be perfect otherwise the hunt will go south and you will end up with only a rabbit’s foot to put on your fender.

Government agencies have been set up per location to monitor hunting activities and they provide prospective hunters with vital information like the prevailing species of game in the area, the location of the hunting grounds and rules that need to be followed while hunting. These briefings aim to address the conditions that need to be met for a successful hunt. However, not everything can be provided in a pamphlet.

During the early 20th century, an avid hunter by the name of John Alden Knight gathered some hunting folklore that he heard or picked up from his hunting trips and decided to make a refinement of the factors that were present in one or more of these tales. As his research progressed, he was able to narrow down the factors to 33 and retained only the top three factors that had merit and significant bearing to his theory.

The sun, the moon and the tidal interaction were left and these are what Mr. Knight focused on. It is safe to assume that of the three, the sun had the least effect because its cycle is consistent throughout the year. The focal point of his research then moved to the movement of the tide. The rising of the tides seem to be fairly consistent following a schedule in which the moon was involved.

Tidal motions were also used by fishermen when spotting for a big catch but tides are heavily influenced by the moon. The moon on the other hand provides enough evidence to consider it to be the best factor in determining the best time to hunt but still lacks on certain aspects.

It was at this point that Mr. Knight saw that the three factors, if considered against each other, did not influence the best time to hunt but the sun, the moon and the tides worked in conjunction during hunting season and this, with further research, proved to be accurate enough that he made a table containing the phases of the moon, the times for sunrises, sunsets, moonrises and moon downs. This table is what is now popularly called as the Solunar Table. Solunar is an amalgamation of the terms Sol (for the sun) and Lunar (for the moon).

This table is still being used until today and research done by scientific and hunting experts further proves the accuracy of Mr. Knight’s observations. Several software developers have also come up with different mobile apps that utilize GPS technology which boosts the accuracy of the table and this further helps new hunters determine the best time to hunt.

See our article on the best hunting apps to help you with more options.

Why does it work?

Unlike the top predator, animals see time differently and base their motions or activities on this perception. Animals use their surroundings in determining when it is time to nap or if it is time to hunt or gather food. It is this behavior that led researchers like Mr. Knight to come up with the Solunar table. The observations that stands out from research is that animals (fish included) are more active during Solunar periods than other times of which they have been observed to have little or no activity.

The most commonly observed fact is that animals have a behavioral tendency to use the cover of darkness to move around and this is far more noticeable when the phase of the moon is just about right, notably during a full or a three-quarters moon. 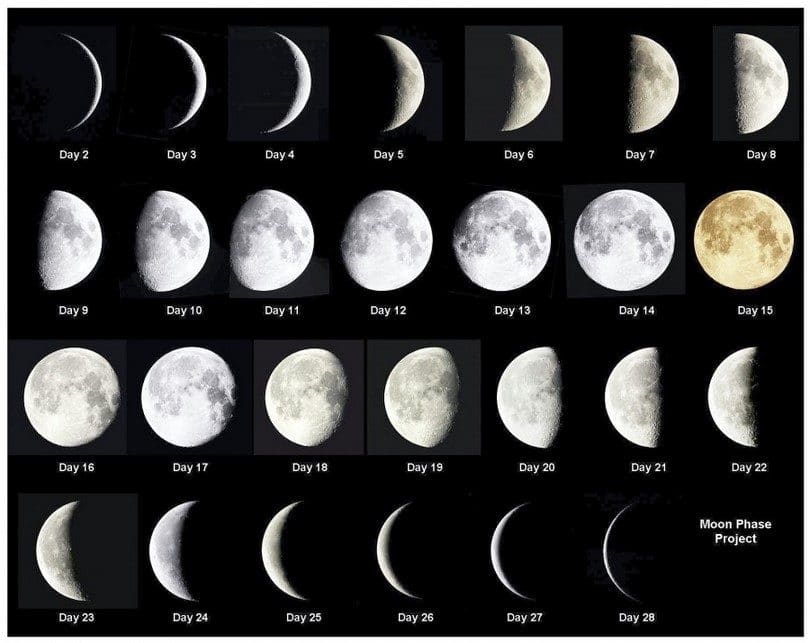 Fishing enthusiasts have always used the movement of the tide as guide; hunters, having no concern over the connection of tides with the sun and the moon, focus on rising and setting of the sun as well as the moon. Most game forage during this time and, like fish, uses the darkness for cover and the light of the moon to move about.

First off, in order for you to understand how to use a Solunar table, you must know how it is laid out and the information that it contains. Online time tables come in monthly and weekly formats with basically the same information and some added data depending on your preference and the service that the website or app provides. 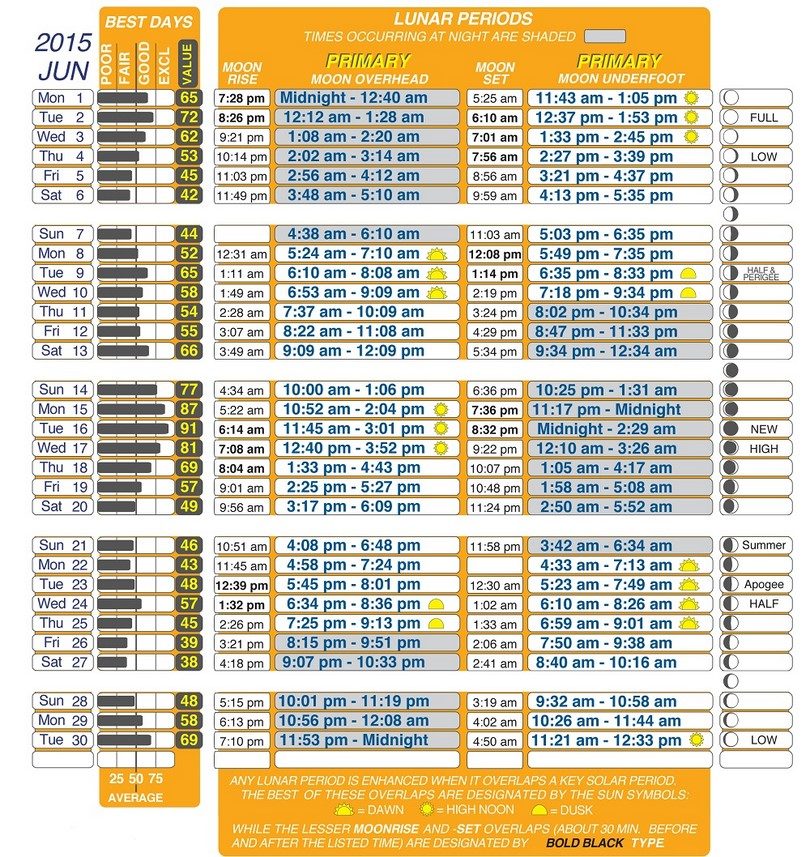 The sunrise and sunset times can actually be sourced from other references like newspapers and weather websites. You may notice that we have listed times for Moon-up and Moon Rise; “aren’t they the same thing?”, you might ask. No, they are not. Moon rise and moon set refers to the times wherein the moon rises above and below the horizon much like what the sun does during dawn and at dusk. Moon up and moon down on the other hand is the period of the day when the moon is directly overhead or directly under our feet as explained earlier.

It has been observed that fish and game feed during this time and hunters are advised to settle on their hunting spots at least an hour before the start of the major Solunar period to mask their smell and let their senses acclimatize to the hunting environment. Hunters who refer to the major periods often catch the biggest game, or if not the biggest, the better catch than those who brush the Solunar table away. 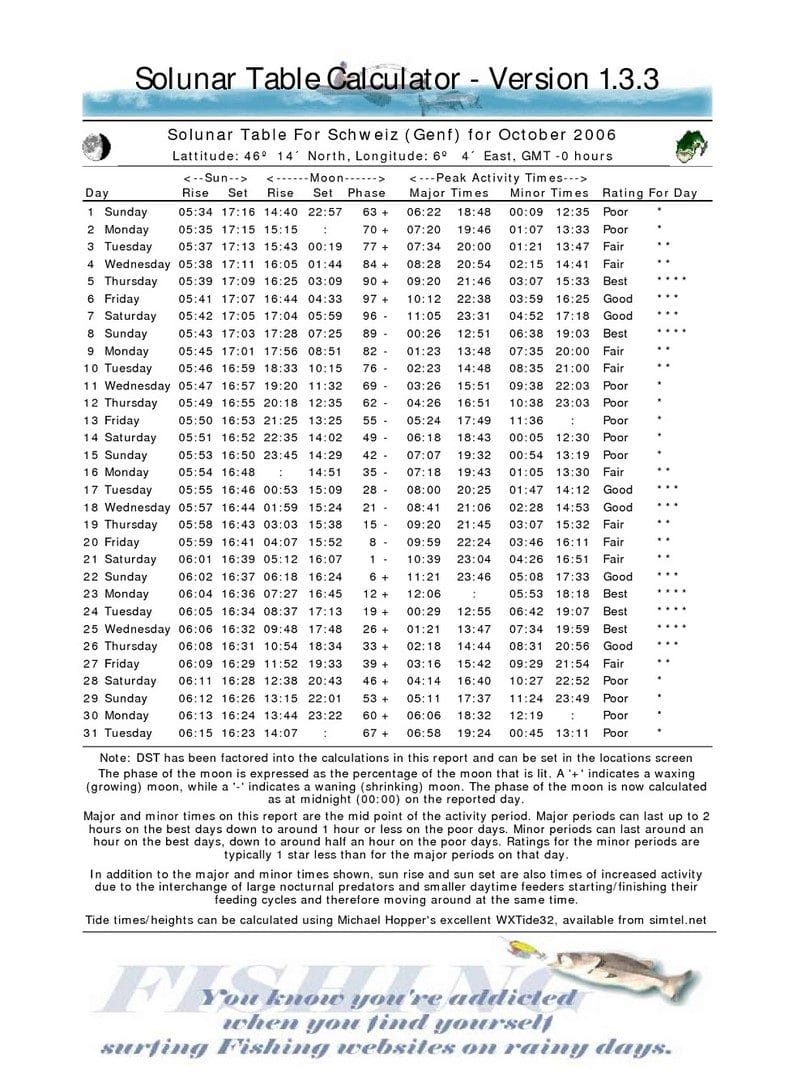 The minor Solunar period on the other hand is a short period of activity that is connected to the rising and setting of the moon. Minor Solunar periods often last for about an hour, and, while the chances are considerably lower, minor periods is still a great opportunity to take advantage of and hunt or fish. Like humans, some animals also like to take quick snacks and nibbles and often use the minor periods to do so.

Some applications, websites and tables often include a daylight savings time indicator as well as feeding periods. These are added data and often confuse new hunters and beginner fishermen. It is much better to choose the Solunar table that you can easily understand and use.

Now, before you grab your Solunar table and hunting gear there are still a couple of factors to consider that will greatly affect the outcome of your great hunt. While the Solunar table is a great tool and evidence has suggested its effectiveness and efficiency, you still need to consider the following:

The best time to hunt is during the major periods in a Solunar table. It is one of the most overlooked and misunderstood hunting tools but, as studies have revealed, it actually holds the secret in determining the best time to hunt regardless of what part of the globe you may be in but never rely on this table alone. 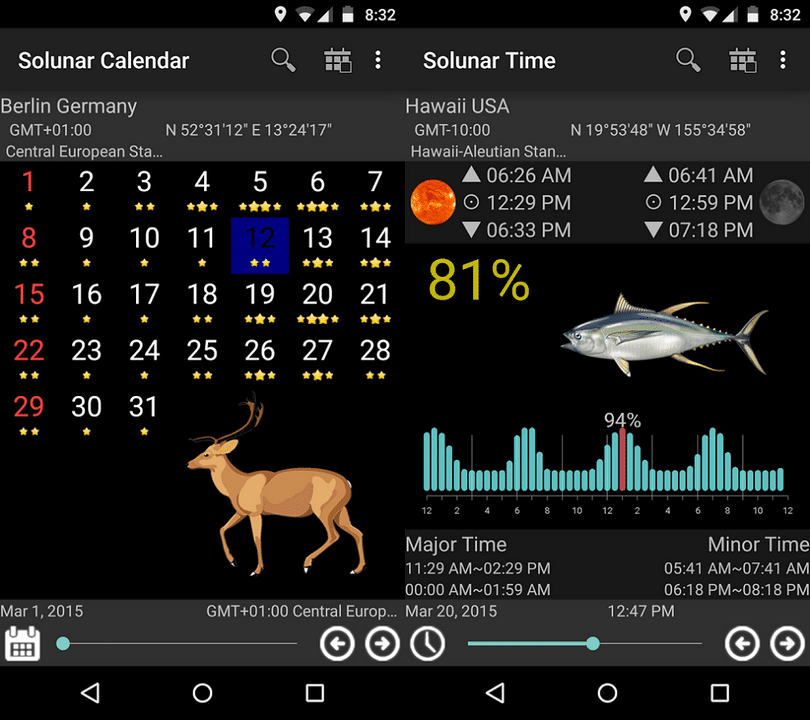 Consider the season, the weather, the location and your experience when planning a hunting trip. Remember, a well-prepared hunter is a bountiful hunter.

Check out our article review of the best hunting gear for more insight.